The inaugural Australia-Japan Youth Dialogue formally commenced with an induction session at the Foundation for Young Australians, facilitated by Melissa Conley Tyler, National Executive Director of the Australian Institute for International Affairs.

Delegates then attended a welcome reception at Government House hosted by The Honourable Linda Dessau AC, Governor of Victoria, and Mr Howard. Opening remarks were also provided by Mr Murray McLean AO, Chair of the Australia– Japan Foundation and a former Ambassador to Japan (2004-2011). The formal commencement of the Dialogue continued with dinner at Rice Paper Scissors in Fitzroy. 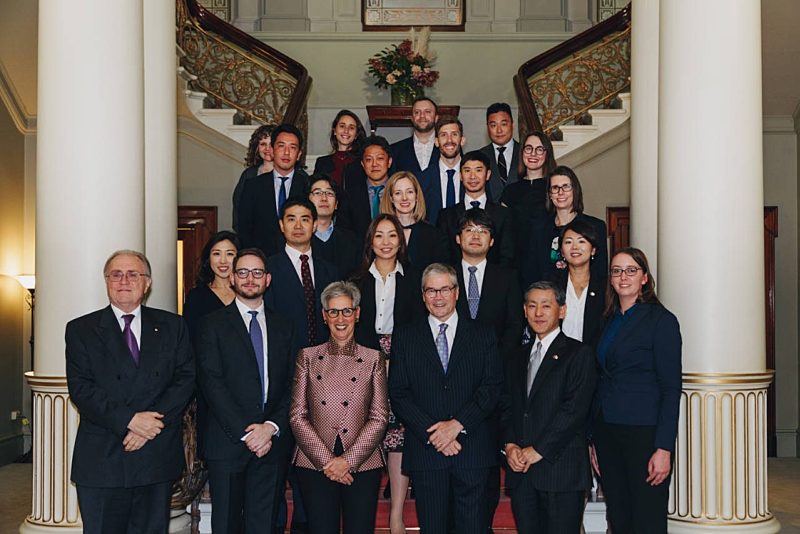 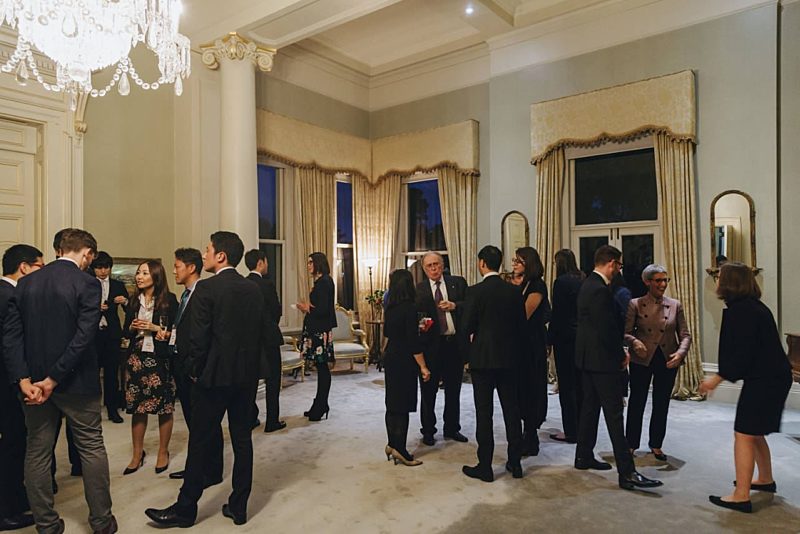 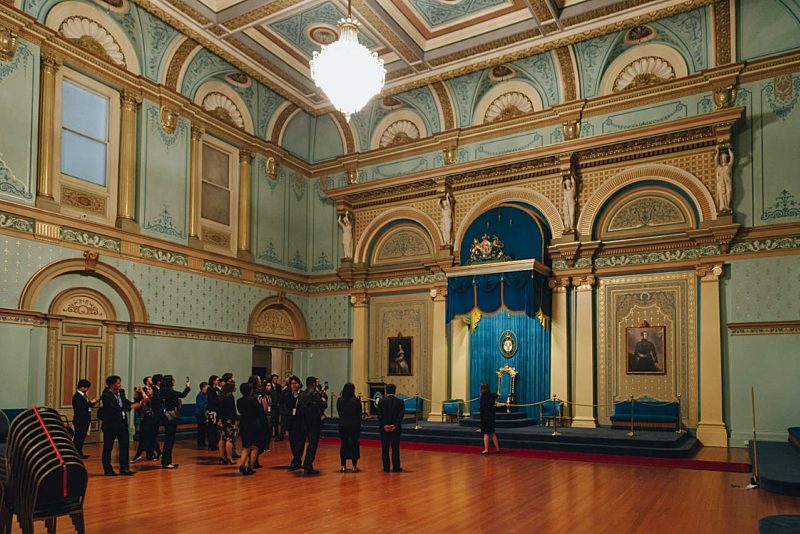 Session 2: Governance and public policy: the view from Tokyo and Canberra
Following a traditional Welcome to Country, the first substantive session of the Australia- Japan Youth Dialogue canvassed how politics, policy and the media interacted in Australia and Japan. The session sought to illuminate how both countries are grasping a range of opportunities while navigating challenges including China’s assertive regional policies, President Trump’s worldview, Russia’s ambitions to be seen as a global power and the United Kingdom’s decision to exit the European Union.

The three speakers contrasted Australian and Japanese politics and the way the media in each country covers politics, speaking to the difference in political diversity in Japan and Australia, particularly noting the apparent disconnect in Japan between young people and political parties. They discussed the media’s depictions

of Renho Murata, Yuriko Koike and Kisha Clubs in Japan, and how at various times Japan and Australia had trouble holding onto Prime Ministers. They also provided informative overviews of the Australian and Japanese political environments and the dynamic forces by which they are shaped. 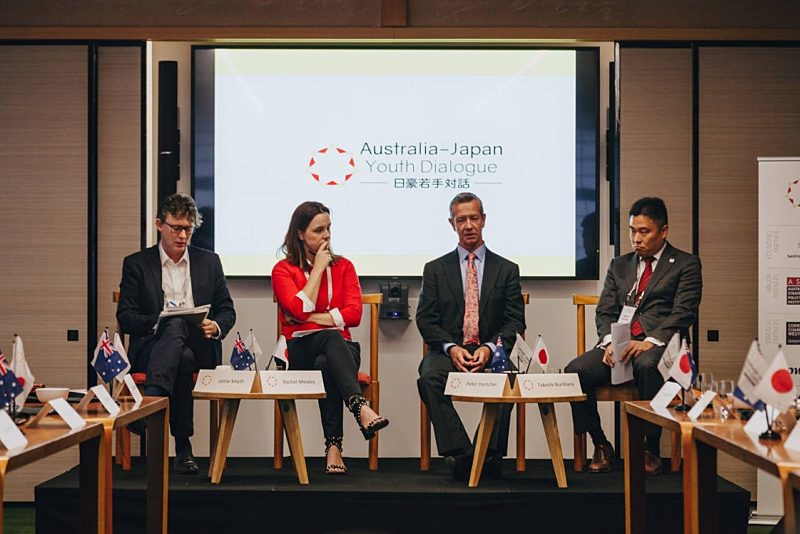 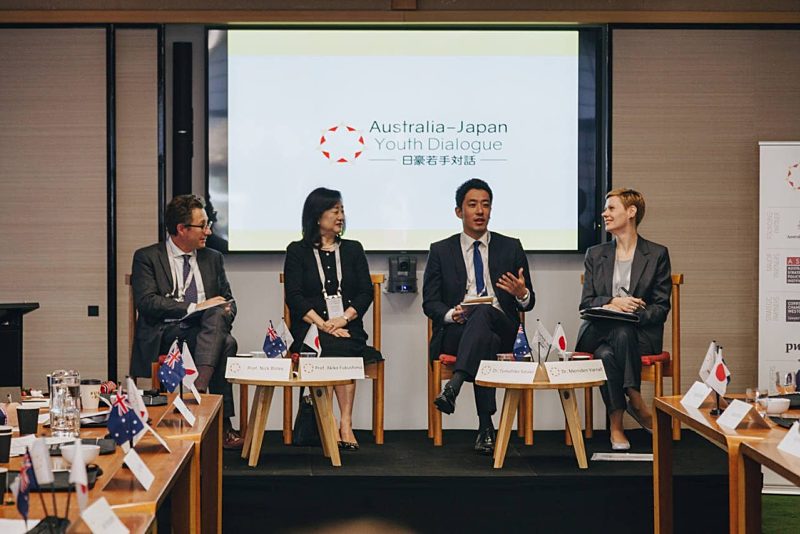 Delegates discussed the Chinese government’s world view and moves in the East and South China seas, North Korea’s nuclear ambitions, and how the Abe government’s national security priorities and policies were shaped by a changing attitude towards China between the 1990s and the 2000s. Delegates spoke to the perception of Australia in China, the reasons for China’s attitude towards North Korea, and the feasibility of proactive Japanese involvement in the South China Sea conflict, with panellists emphasising how youth voices would be important in shaping the future of the region.

Session 4: Simulation of a DPRK security contingency
In a session facilitated by former Chief of the Australian Defence Force Rear Admiral Chris Barrie (ret’d), delegates were collected into teams todiscuss a hypothetical response by Australia and Japan to a military attack by North Korea on a South Korean navy vessel, exploring implications in the areas of trade/economy; humanitarian; security/defence; and political/government.

The respective teams provided high-level responses noting the importance in identifying the priorities in humanitarian exercises and security responses; setting up an effective framework for trade which adequately addresses security risks; and developing an effective scheme which balances regional influences and interests.

Session 6: Reception at Crown Melbourne
Following a visit to the iconic Eureka Skydeck, delegates convened at The Waiting Room at Crown Melbourne for an evening reception hosted by Melanie Brock, Chair Emeritus of the Australia New Zealand Chamber of Commerce in Japan. This session provided an opportunity for informal discussions over drinks and canapés.

Session 7: Dinner with keynote from Tom Switzer
Tom Switzer delivered a short presentation about President Trump’s impact on the global landscape. Delegates discussed how the Trump Presidency had been received in Japan and Australia, particularly with regard to whether it would lead to any significant changes in US posture or alliance relationships. 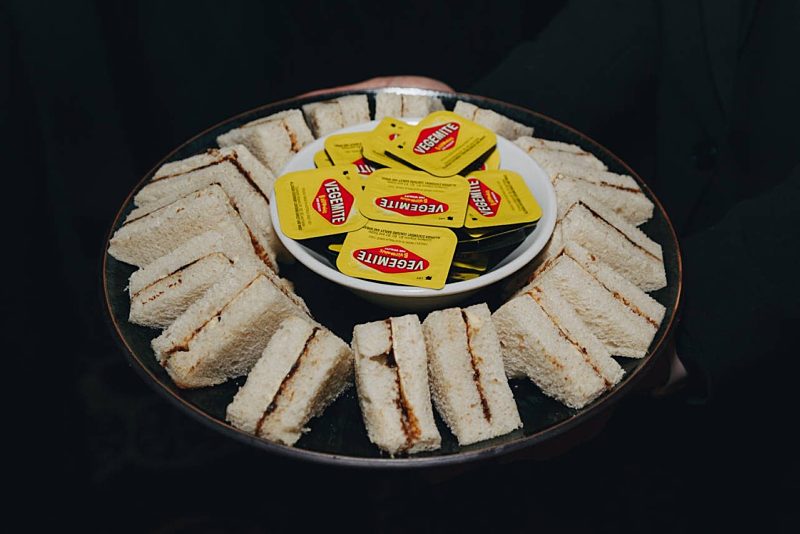 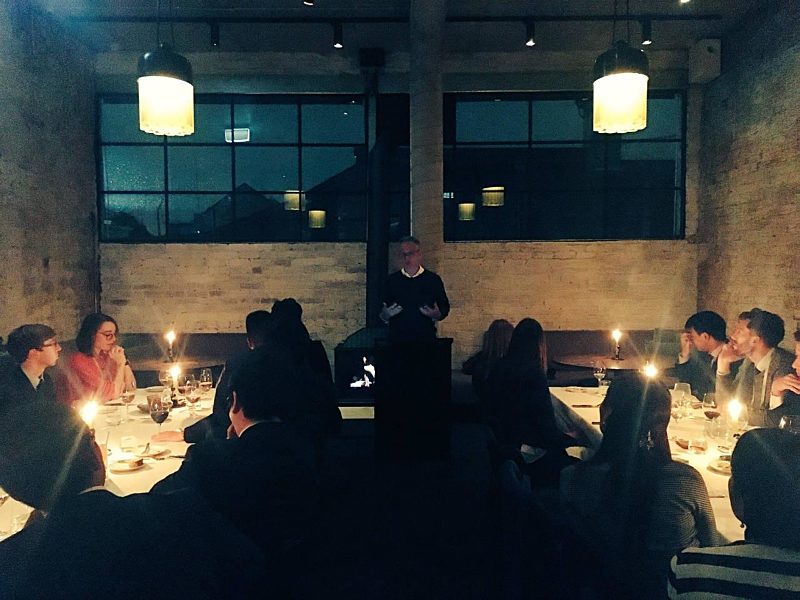 Session 8: Business, trade and investment: capitalising on JAEPA
This session focused on the importance of the investment relationship between Australia and Japan and how JAEPA has begun to foster a stronger bilateral trade relationship.

Panellists explored the macroeconomic situation in Japan, including how growth trajectories are being impacted by demographics, regional inequality and the cost of energy. Investment and innovation was seen to be the best way to drive growth in Japan, and free- trade and bilateral trade agreements are an important step to promote such conditions. Panellists also spoke to the efficacy of the JAEPA and how organisations like the ANZCCJ were assisting Australian businesses to overcome operational hurdles in Japan.

Questions from the delegates touched on a number of issues including the reasoning behind the lack of presence of Australian corporates in Japan, whether Australia’s reliance on its long- standing relationships contributes to existing outdated perceptions, the effect of the TPP11 on JAEPA, and potential industries through which Australia could gain a competitive advantage in Japan.

Session 9: STARTUP: Innovation and entrepreneurship in the Japan-Australia relationship
This session canvassed how Australian start- up ecosystems are performing and how they may relate to opportunities in Japan, the emergence of an innovation culture in Japan complete with co-working spaces for start- ups, prototypes and information centres, and what Japan and Australia can learn from each other when it comes to supporting innovation.

Delegates discussed the benefits Australia offers for Japanese start-ups as compared with the United States, pondered what ‘good problem’ might be solved from an Australia-Japan standpoint, and explored the acceleration programs on offer through Australian and Japanese universities. 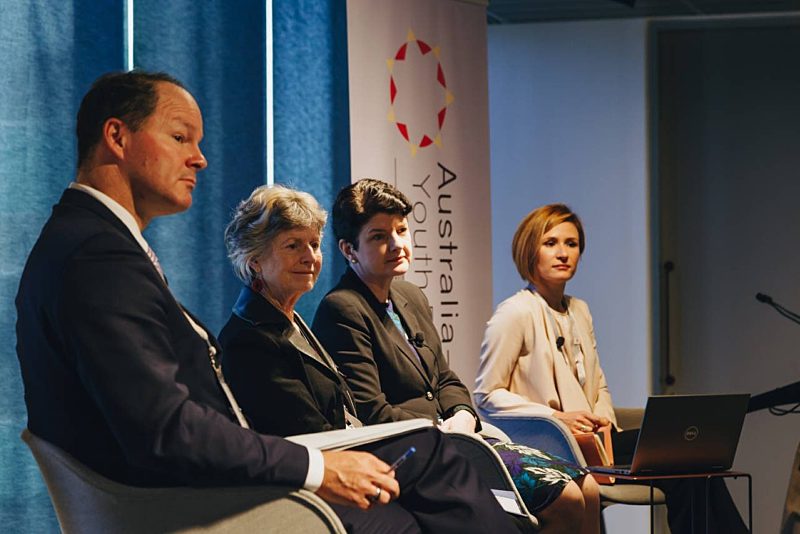 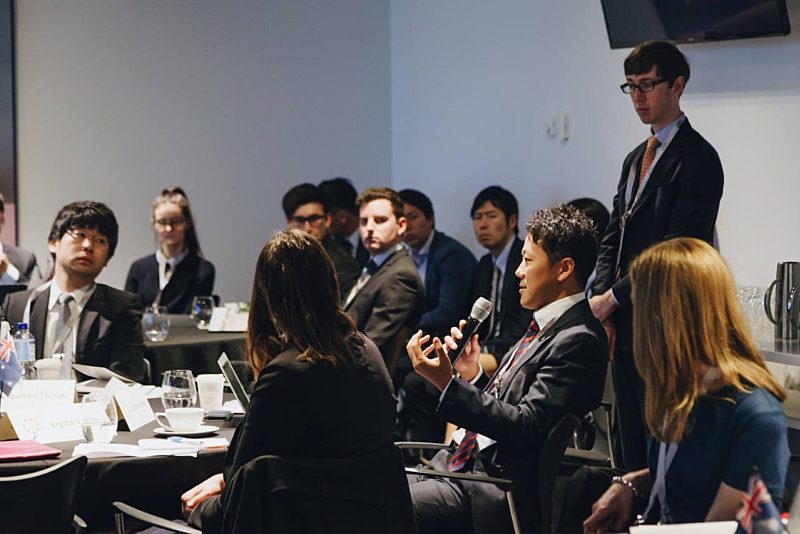 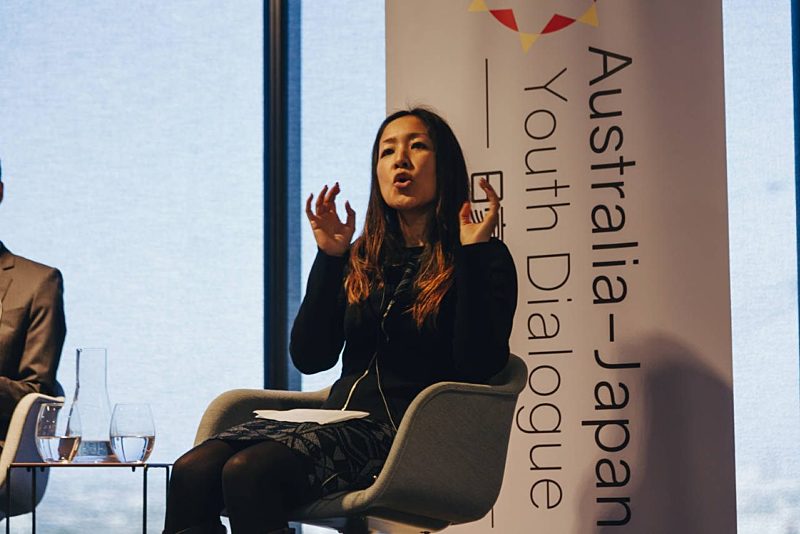 Speakers reflected on the energy markets in Australia and Japan and how both governments are responding to the science of climate change,along with the global governance aspects of climate change and its implications for national security, mass migration and infrastructure. They also discussed how the green energy market is growing, and the potential of geothermal and wind energy.

Delegates asked about Japanese investment in ‘clean coal’ developments and integrating renewable energy and electric vehicles, the role of batteries in the Australian market, how the impact of the Paris Agreement was holding up since the Trump Administration backed out, and the role of carbon emissions targets.

Session 11: Tour of the NGV’s HOKUSAI exhibition
For the next session, delegates enjoyed the HOKUSAI exhibition at the National Gallery of Victoria, personally guided by exhibition curator Mr Wayne Crothers, providing delegates the opportunity to appreciate and celebrate Japanese culture while in the heart of Melbourne. 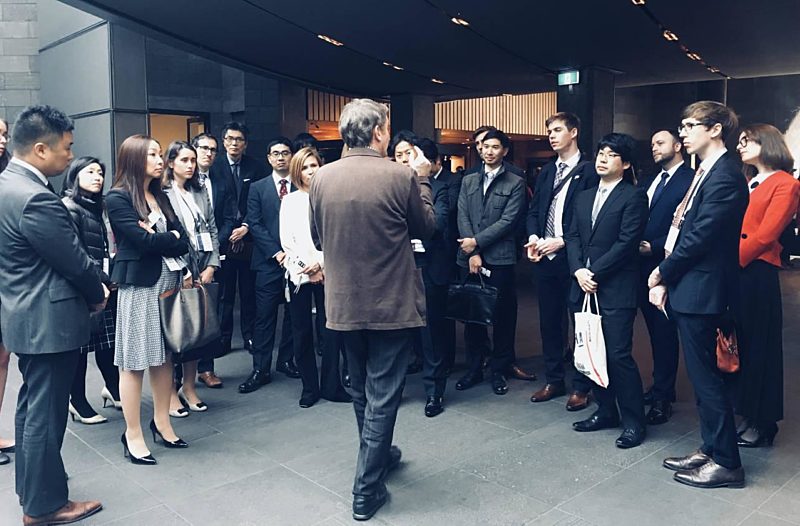 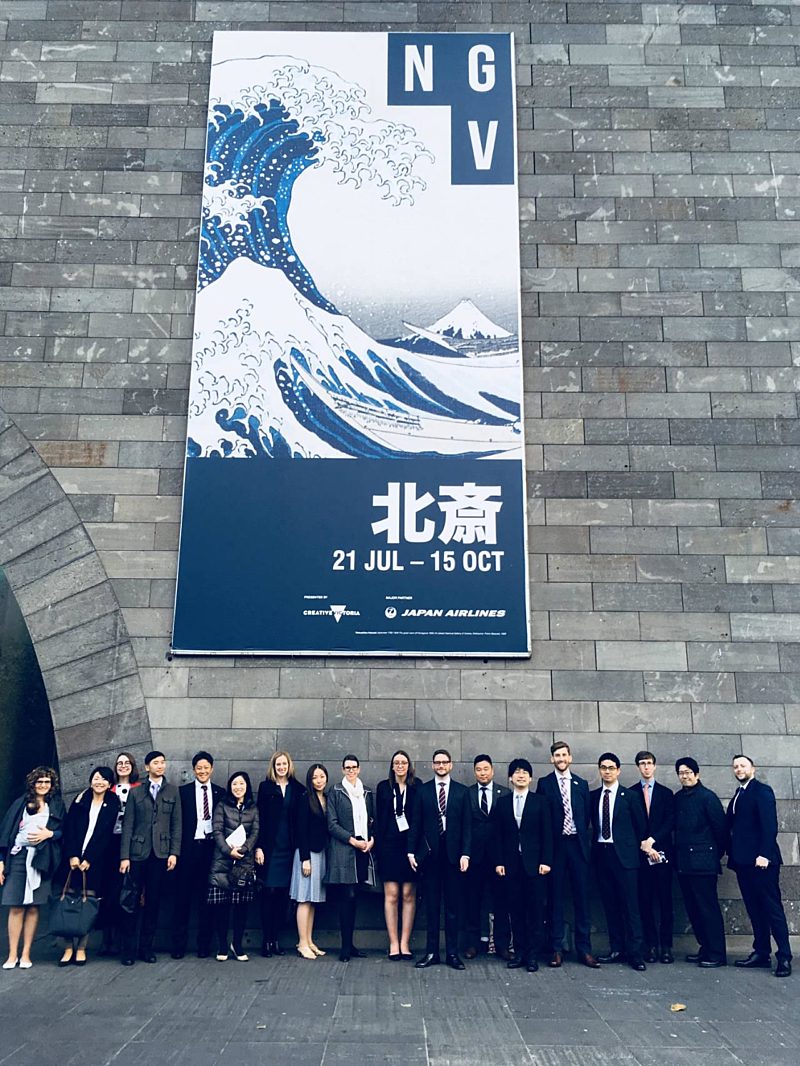