The second Australia-Japan Youth Dialogue commenced with a welcome session at the Australian Embassy in Tokyo, led by the dialogue’s founder, Mr David Lang. The welcome was followed by a message from Prime Minister Abe Shinzo urging further strength and partnership between Australia and Japan in order to contribute to peace and security in the region.

Session 1: Political Animals – Media, Policy and Politics
The dialogue’s first panel dove into a discussion on the interplay between media and politics and how this influenced policy in both Australia and Japan. A theme throughout the talks was that one of the biggest global risks was the domestic politics of advanced economies. Delegates discussed the recent Australian federal election and the mandates of the newly elected Morrison Government, canvassing the domestic policy agendas of both leaders such as Prime Minister Abe’s push for constitutional change to Article 9 and Prime Minister Morrison’s focus on tax policy and achieving a budget surplus. The speakers expounded upon the growing tide of populism in advanced economies, highlighting Prime Minister Morrison’s pitch to “govern for the silent Australians” whilst pushing back against “negative globalism”. There was a sharp contrast with the rise of the Reiwa party in Japan who won two seats in the recent election and whose voters expressed strong dissatisfaction with the media and the governing establishment. The delegates further explored a rising distrust in the media, including reporting of the nuclear fallout after the Fukushima disaster. During discussion time, delegates offered views on the ways in which politics is covered in their respective countries, Kisha clubs, gender bias within media organisations, and the differing means of obtaining information from government agencies.

Following the first panel discussion, the delegates were hosted by Hon. Richard Court AC at the Ambassador’s Residence, providing an opportunity for further networking and discussions with embassy staff. 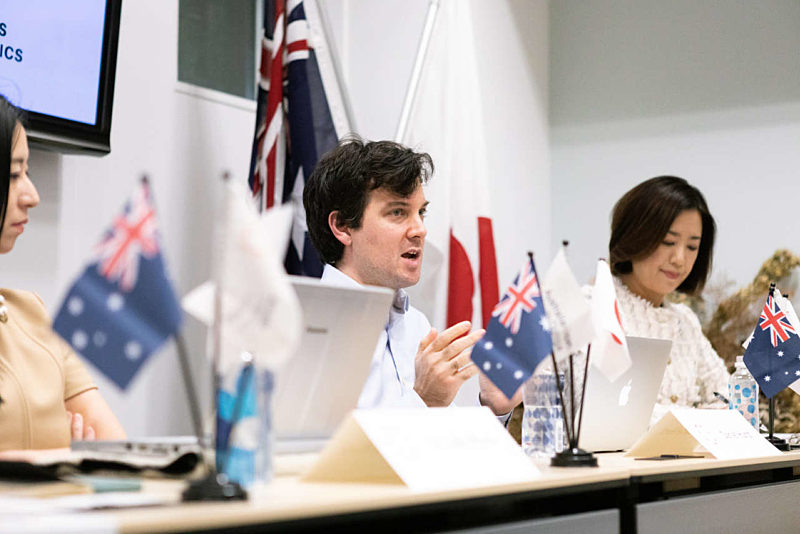 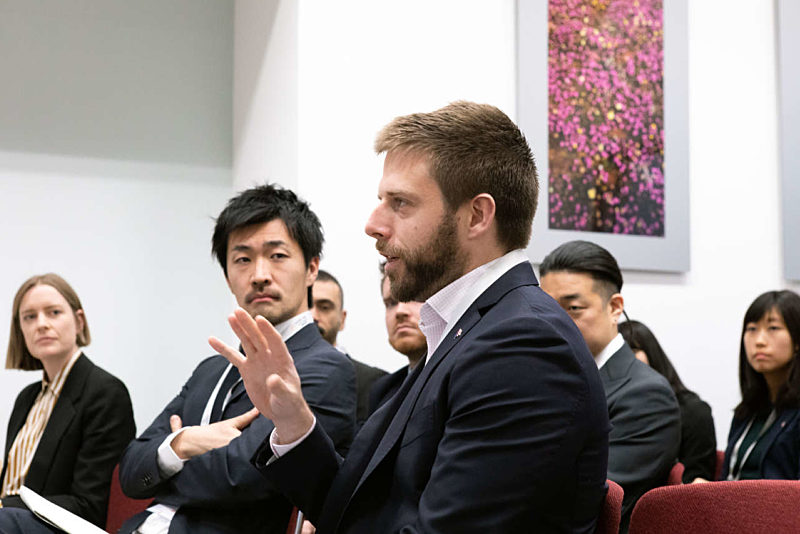 Session 5: Security and Leadership in an Uncertain Indo-Pacific
Day two of the dialogue kicked off with discussions on the definition of the Indo-Pacific region and how it is perceived by the countries that fall within its purview. The panel discussed practical opportunities for both countries to cooperate to realise a peaceful and prosperous Indo-Pacific. Both nations are key players in the region and must join forces in the wake of the economic and political threats being posed by China. Cybersecurity issues were also discussed, as well as the roles and responsibilities of the two countries in shaping a rules-based international order.

Delegates offered their views and ideas on the topic of threat perception and discussed ways the Australian economy might become less dependent on China. Furthermore, delegates engaged in discussions with panel members and offered insights into how Australia-Japan relations can be further strengthened in a way which would ultimately enhance both countries’ economies and stimulate collaboration in new fields such as cybersecurity. 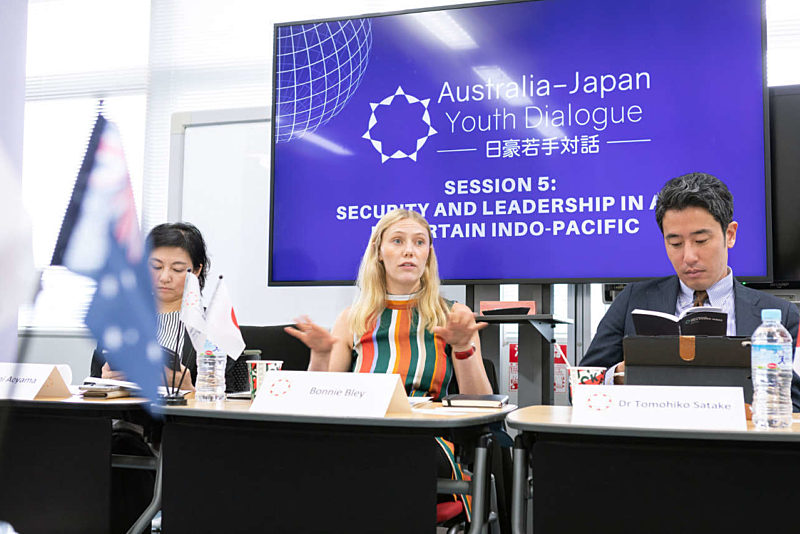 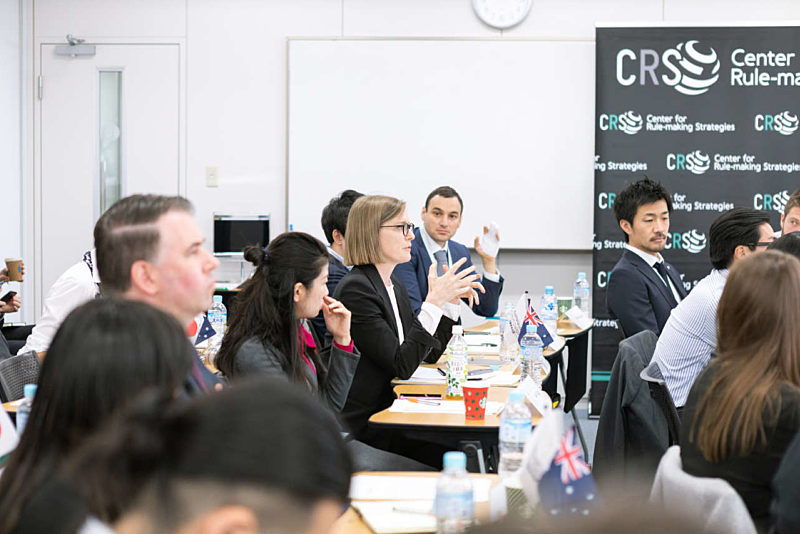 Session 6: Japan 2030
The third panel discussion focused on what Japan’s future could look like within the next decade. The panel touched on issues such as climate change, cashless society and declining population issues, as well as diversity and immigration.

Speakers noted that while many Japanese companies have policies in place to increase and cater for diversity in the workplace, they do not have the proper mechanisms to implement these policies effectively. The panel highlighted the reality that change would need to be implemented at higher levels of the corporate ladder to be impactful.

Discussion also moved on to the problem of a declining population and workforce, and then immigration—both issues which will play an outsized role in Japan’s demographic future. Delegates discussed policies to enable more foreign workers to find employment in Japan, and foster greater collaboration, cooperation and innovation. The discussion also touched upon ways to enable more women to participate in the workforce, including by improving policies around paternity leave and childcare.

Sessions 7 and 8: Tour of the National Diet Building and Roundtable
Next, delegates embarked upon a tour of the Japanese National Diet Building, followed by an open dialogue with politicians from both leading and opposition parties. This session explored the nature of the unique relationship shared between Australia and Japan, the economic and political challenges being faced by both countries, global warming and post-disaster recovery strategies.

Delegates were received by Mr Ichiro Aisawa and Ms Kimi Onoda, who reflected on policies being implemented in Japan to stimulate the nation’s economy, noting that Australia’s strong and growing economy is largely due to its diverse labour force. The speakers also touched on the topics of immigration, cultural diversity and encouraging more women to enter the workplace. The speakers shared their experiences visiting Australia and praised the efforts of both governments in strengthening the economic, political and social links between both countries.

Delegates, reflecting on the day’s sessions, discussed with the speakers China’s influence in the region, cybersecurity and their visions for Japan in the next decade, including the future of the Australia-Japan relationship. In particular, delegates and speakers discussed the importance of collaboration between Australia and Japan in the fields of disaster recovery and climate change, emphasising that the two countries can learn from each other and implement lessons learned to reduce future hazards.

Panelists began with an exploration of transitioning roles in the long-standing Australia-Japan trade relationship as Australia moves towards a service-based economy. The panel highlighted that while Australia’s resource wealth was historically more compatible with Japan’s manufacturing-orientated economy, there is still great opportunity for Australian investments in Japan by companies with the patience and persistence to fight for a bigger market share, notwithstanding Japan’s shrinking economy. Further work is still needed to readjust perspectives which overlook Australia’s innovation and productivity in the services sector through stronger branding initiatives by government and industry. Delegates discussed the challenges Australian companies face in promoting their commercial visions in the region but noted the valuable role that institutions such as the Australian and New Zealand Chamber of Commerce can play in representing, providing information and developing commercial connections for foreign companies looking to invest in Japan.

Speakers reflected on the role bilateral trade can play in stabilising the region, and further stressed the importance of Australian companies breaking away from their overreliance on the Chinese market to refocus on the broader Indo-Pacific region. Speakers and delegates also discussed scientific cooperation, which is continuing to expand in a number of fields.

Session 11: The Gender Agenda – Diversity, Equality and Participation
The second session of the day saw an expert panel discuss gender, inclusion and diversity in Japan. Panelists first shared their views and experiences on the state of workplace gender inequality, traditional gender norms, governance and the role of international institutions.

Question time brought forth discussion on a wide variety of topics, such as the issues of unconscious bias and culture as a barrier to change, as well as barriers in the structure of the Japanese labour system which restrict the ability of women to work. Generational gaps were voiced as a driver of change, particularly as young men shift norms surrounding parental leave, and ageing board members are replaced by younger talent. The discussion repeatedly touched upon the need for societal change in the context of gender roles, particularly in the household, before concluding with discussions about the experiences of other minority groups within Japan.

Session 12: Delegate Reflections
To begin the concluding sessions of the dialogue, delegates shared their thoughts and experiences from the past three days. Many delegates noted that they had attained invaluable knowledge and experience from the dialogue, as well as deepened their understanding of Japanese culture and issues concerning both Australia and Japan. Delegates also mentioned that they had gained a variety of ideas for the future of the relationship.

Many delegates also praised the organising committee for recruiting such a diverse group of delegates, including representatives from various academic fields and professions as well as different age groups and cultural backgrounds. The organising committee noted that the AJYD alumni community is growing and that they look forward to organising more events and continuing to foster collaboration into the future.

Session 13: Q&A with Mr Baden Firth
Delegates then visited the Mitsubishi Corporation headquarters in Marunouchi, where they were hosted by Mr Baden Firth, who has been working in the company for many years. Mr Firth provided a short presentation including a briefing on Mitsubishi Corporation and his personal experiences living and working in Japan as a member of a major Japanese company. Delegates were given the opportunity to ask about Mr Firth’s insights as both an experienced Mitsubishi representative and as an Australian based in Japan for over 20 years. The session covered the changing nature of the global market, innovations in Mitsubishi Corporation's systems and practices, and tips for finding success in a long-term role overseas.

The final session of the AJYD program for 2019 was an Australian-style brunch at Bills in Odaiba followed by a visit to the TeamLabs Borderless exhibition in Odaiba. Delegates had the opportunity to relax and reflect on their time together while enjoying some of Tokyo’s best sights.