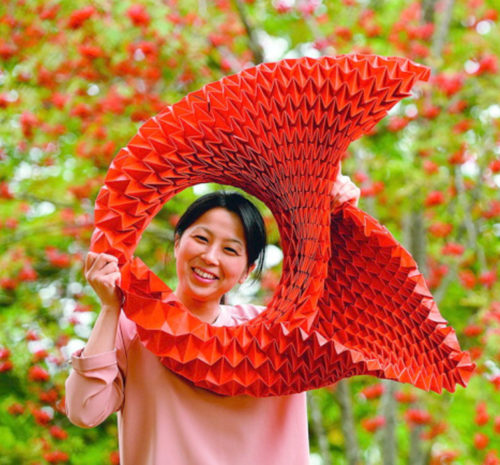 Kaori Kato obtained her bachelor’s degree in Fine Arts (Honours) in 2009 and her master’s degree in Visual Art in 2010 from the Faculty of the Victorian College of the Arts (VCA) at the University of Melbourne. Kato returned to Japan, Hokkaido in 2013, and has since had her work displayed at a number of local and international shows, including in Australia.

Kato was invited to participate in the visual arts program of the EU-Japan Fest, and held a number of workshops and lectures during the Paper Object Festival held in Riga, Latvia as part of the program created to celebrate the 2014 European Capital of Culture (ECoC). Her work was featured as part of the Vancouver fashion week SS 2019 collection, and Western Canada Fashion Week SS2020 collection, showcasing 23 different wearable paper sculptures between the two events.

In addition to being an artist, Kato works for the Tokachi International Association in Obihiro City, where she is involved in the management of development education projects and public relations work commissioned by Japan International Cooperation agency (JICA). She also organises and manages visits to local schools with JICA trainees from developing countries, to engage in cultural exchange with the students